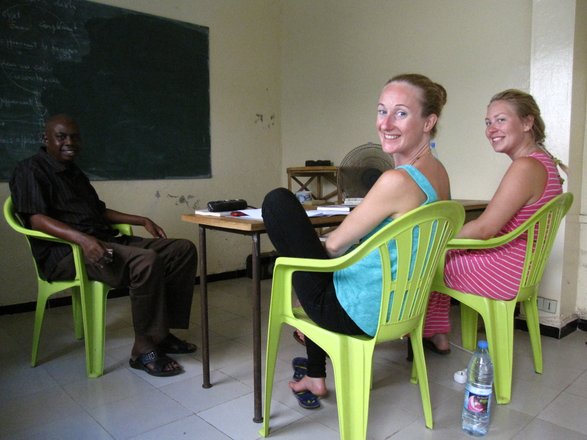 A unique opportunity of learning French in Senegal, offered 3-15 January 2016 by the Waaw Centre for Art and Design in the atmospheric colonial town of Saint-Louis. Waaw (pronounced 'wow') is an independent Finnish-Senegalese artists' residence.

What will I learn?

You will learn to speak and understand French better. You will get an insight into Senegalese and West African culture, with its influences from the French colonial era. You will devote some time to the structure of the French language, but the empasis is on developing your language skills by interactive conversation exercises. The language is studied in the context of Senegalese daily life, where going to the shop around the corner is an adventure in itself.

Groups will be small for maximum impact: the number of students per level will not be larger than 8. Our teachers are Mr Moutarou Diallo, Master in International Education, Brattleboro (US), Mr Khalifa Diop, Inspectedur de l'academie de Saint-Louis and/or other Senegalese and European teachers with a solid experience of teaching French as a foreign language. Teachers and other Waaw staff will be responsible for the afternoon and free time activities.

Who can take part?

The course is intended for anyone interested over the age of 21, irrespective of professional or academic background. Teachers will use a communicative approach, with interactive exercises. The language of instruction is French, but if needed, explanations can be given in English (and Finnish and Swedish, if applicable).

The beginners' group is primarily intended for students without prior knowledge of French, but it can also be taken as a refresher course for "false" beginners. The intermediate level suits those who have studied French for 1-2 years. If you had French as a school subject for several years, the advanced level is for you. There will be a written placement test on Sunday 3 January, your day of arrival in Saint-Louis.

We offer three accommodation options in the immediate vicinity of the course venue. In all three, water, bed linen, towels and mosquito nets are provided.

1. Hotel Siki (200 m from Waaw) is a stylish designer hotel, named after the 1920's boxer Battling Siki, who originated from Saint-Louis. The interiors have an African touch. Rooms are self-contained and furnished with desks. There is free wifi in the cosy restaurant downstairs. Breakfast is included. www.hotelsenegal.net

2. Ô Sésame (500 m from Waaw) is a private house with two guest rooms on the second floor, recently in use as a B&B. Rooms have ensuite bathrooms. There is a shared kitchen and a terrace with a lovely view of the river Senegal. No wifi. See pictures here.

Sunday 3 January is arrival day, reserved for settling in and getting acquainted with the immediate surroundings as well as for a small placement test.

Tuition is scheduled from Monday 4th until Thurday afternoon 14th January. Friday 15th is departure day. Classes are held 9.00 am-12.30 pm every day apart from Sunday 10 January. Some tasks for individual study may be given. The study material is included in the fee and will be distributed to students during the course.

In the afternoons, there will be either additional conversation classes, invited guests, study visits etc, giving you an opportunity of practising what you have learned earlier. Screenings of Senegalese and West African films in French are organised in the evenings. On Sunday 10th, we will make a trip to Djoudj National park, famous for its rich bird life. One afternoon, we will also make a tour around the island of Saint-Louis. These excursions are included in the fee. In addition to this, you can (for a supplementary fee of €10-30) take classes in textile dyeing (4 hrs), glass painting (4 hrs), sabar drumming (6 hrs) or Senegalese mbalax dance (4 hrs), all taught in French.

Classes will be held at the Waaw centre and in the building next door; the afternoon programme will take place either at Waaw or out on town. The facilities at Waaw (including the wi-fi connection) are at participants' disposal throughout the course.

The course price includes tuition, all course materials, activities in the evenings and on weekends as well as the excursion to Djoudj. There is no reduction for late arrival or early departure. The price does not include air fare, transport from Dakar and meals. The price varies according to the accommodation option:

Accommodation in Dakar or transfer between Dakar and Saint-Louis is not included in the course price. We can reserve simple accommodation for you in Dakar for the night between 2 and 3 January (or even earlier, if you so wish), and arrange for you to be picked up at the airport and taken to the hotel. In the morning of 3 January, our own taxi will take you from the hotel straight to Waaw (approx. 4.5 hours). Transport back to Dakar and the airport will be organised on 15 January. The price is €70 in a shared double, €80 in a single room, including breakfast. NB: we reserve the right to any changes.

How to get to Saint-Louis

The cheapest flights to the Senegalese capital, Dakar, are found through search engines such as www.skyscanner.net. Most flights arrive in Dakar in the evening or late at night and depart at night. In practice, you will have to arrive in Senegal on 2 January (or before) and spend one night in Dakar (or possibly arrive on a night flight early in the morning on 3 January, just in time for onward transport). NB: Please don't book a return flight departing earlier than in the evening of 15 January.

To get from Dakar to Saint-Louis, you can either take a shared sept-place taxi for 7 people from the bus and long-distance taxi station Gare Routiére Pikine 10 km outside Dakar (approx. 5-7 hours incl. waiting time; total price including local transport approx €20). Alternatively, you can make use of the more comfortable transport organised by Waaw (see below).

As of May 2015, tourists do not need a visa for Senegal for stays shorter than 3 months. We recommend the following vaccinations: hepatitis A and B, tetanus and possibly typhoid. Malaria profylaxis is also advisable.

We would be happy to help you with any plans for travel elsewhere in Senegal.

Please fill out the registration form and email it to the course administrator Mr Staffan Martikainen at info{at}waawsenegal.org. You will then be asked for a registration fee of €150, as a down payment of the total fee, payable either by bank transfer or PayPal.

If you have any queries, you can contact us at the same address. 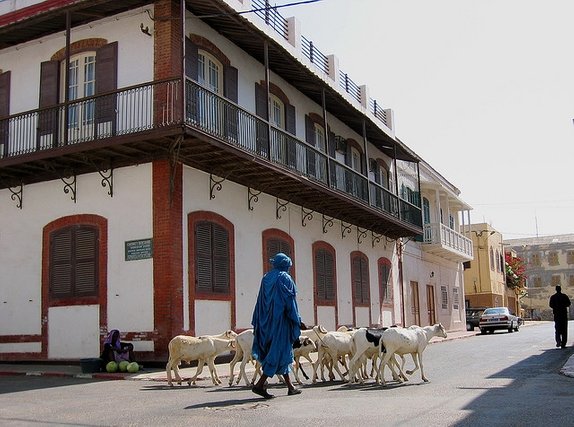 Why study French in Senegal?

What do Youssou N'Dour and Serge Gainsbourg have in common? Both sing in French, even if they come from different continents, Africa and Europe respectively. French is spoken outside France in the 75 countries of the francophonie. If you are interested in other francophone countries than France, Senegal is the place to go.

Saint-Louis, founded in 1659, was the first French base in Senegal, and later become the capital of the whole of French West Africa. Senegal was a French colony until 1960. The colonial period is visible in Saint-Louis in both architecture and the French language, which is still the official language of Senegal. Albeit a second language for most people, French is used in many everyday situations. Many people consider French with a Senegalese accent easier to understand than metropolitan French.

As this is an intensive course, you can make the most of your time and money. Another bonus is the on-site accommodation. In picturesque and peaceful Saint-Louis, everything is close at hand - in contrast to the bustle and traffic jams of Dakar. On the other hand, there are enough things going on in town to keep you busy. The Waaw centre is right in the middle of the Saint-Louis island, with shops and restaurants just around the corner.

Waaw is an independent Finnish-Senegalese artists' residence and centre for art and design that started its activities in 2012.

More information about the centre here. 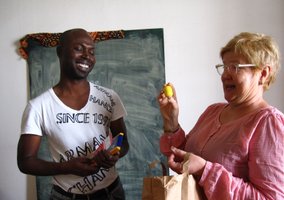 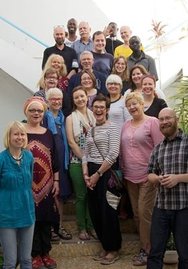 "Our time in Saint-Louis felt truly unique. On my flight back home after the course I was filled with wonder. We had had an experience that was so much more than just a language course.

Our teacher was remarkable both as a tutor and a person. Right from the start, he was able to see what we needed. He accompanied us step by step in the learning process. Classes were interactive in nature, and included lots of exchanges on subjects that were interesting for everyone in the group.

We also devoted some time to grammar structures, and then too, our teacher proved to be a professional."

Senegal is safe for tourists. Visitors are not subject to any threats. In its three years of existence, the Waaw centre has received 120 international guests, mostly from Europe and North America, and so far, no substantial health or security problems have arised.

In Senegal, neither Ebola nor any serious communicable diseases are present. Malaria does occur, particularly during the rainy season in August and September, but those suffering from the disease rarely require hospital care. The most common cause of mortality is diabetes as well as cardiovascular diseases.

The Senegalese often highlight the teranga hospitality concept as something typical for the country, and visitors are certainly made to feel welcome. The fact that there are over 600 French citizens living in Saint-Louis can be no coincidence.

Muslims (over 90% of the population) live harmoniously side by side with Christians and followers of traditional beliefs. There are two Catholic churches in Saint-Louis as well as smaller Protestant places of worship.

Senegalese Islam is dominated by the generally broad-minded Mourid and Tijani brotherhoods, and Islamist movements have not found a place in the country. Women are visible in public life, participate on the labour market and in politics (with 50% women Members of Parliament). Education of girls has been in focus in the last few  decades.

Senegal has never been the target of terrorists: there has been no bombs and no kidnappings. There are no Senegalese fighters known to take part in the Syrian/Iraqi war.

In Senegal, muggings, robberies and other violent crime is rare. It is worth looking out for pickpickets in certain areas, but visitors can in principle move around on foot everywhere.